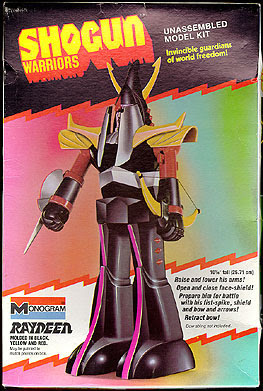 Around 35 years ago, I remember my dad and I (well, mostly my dad) putting together a largish plastic model kit of a Japanese mecha. Mecha are giant robots often piloted by kids and a staple of Japanese anime and manga stories. The mecha we built was Raydeen, a Shogun Warrior unit.

At the time, I remember being really impressed by this model. It was just under a foot high and had face armour that could move and a spring- (or rubberband-) powered bow that could sort of shoot arrows - though not very well. I even think the arms could move up and down (just about).

Well, fast forward to this year.

A few months ago, I had been thinking of doing something a little different as a hobby. I considered a couple of things but then remembered that Raydeen mecha I (my dad) had constructed years ago. So, I wondered, did Japan still produce plastic models of robots?

Stupid question. Of course they did!

Gundam models are probably the most prolific mecha modelling kits (though there are other types) and there are hundreds of them. They're based on a number of Gundam anime cartoons shown in Japan over the last 30 years or so. Sadly, they never really made much impact over here in the UK - though I suspect some episodes were shown on a satellite kids TV channel at some point.

Bandai's Gundam model kits come in many different sizes and complexitites - from small 1/144 scale models up to 1/48 scale. Some come with just a few pieces that have to be glued together and painted, whilst others have hundreds of parts constructed in differently coloured plastic which just snap together.

Anyway, I chose a 1/100 No Grade (technically a High Grade) kit of the Aile Strike Gundam. Apparently, it's a relatively easy kit to put together whilst still providing a good degree of articulation and moving parts. And it looks pretty cool. After forking out the princely sum of about £24 - including shipping from Taiwan, because getting hold of these kits in the UK is tricky - I received the kit full of multi-coloured plastic runners and went to work!

And here's the "finished" result: 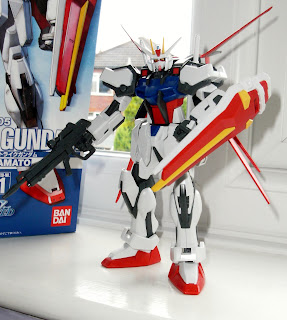 My Aile Strike hasn't been painted at all nor panel lined to bring out the detail. That's just it straight out of the box after cutting the pieces from the runners, cutting off the excess 'nubs', and assembling it. There's no glue involved - although the pesky little red triangle on his head might require some to keep it in place. It's just like a geeky 3D jigsaw puzzle. Not helped by the fact that the Ikea-like instruction booklet is written mostly in Japanese!

The legs, arms, feet, hands, hand, etc all move. You can swap the beam rifle for a beam sabre (a.k.a. a lightsaber) or knife, remove the red booster backpack, articulate it into a number of poses and so on. This Strike Gundam has a lot more features and moving parts than that old Raydeen model.

Now all I have to do is find somewhere to put it. And decide what Gundam I'll get next. :)

Boy, was I in for a show last night.

It might have taken a little while but I finally got to see Dark Knight Rises and it was a fantastic end to this stark, thrilling trilogy of Batman movies. I would even say that I found it was better than the previous two films - yep, even the Dark Knight. But then, I always found The Dark Knight to only be a good film, not a great one.

This film has a lot more heart, more soul and less plot holes than TDK. Yes, credibility is still stretched to the extreme and you still have to hand-wave some thing away. But in general it works.

It was even slightly better than the Avengers movie earlier this year - although the two films are as different as superhero movies can be; Dark Knight Rises was not the colourful, superpowered action flick that the Avengers excelled at.

Like the character in the earlier Burton films, for a hero who is so against guns movie, Batman seems to have a lot of them strapped to all his vehicles - including the new hovering "Bat" (essentially a more militaristic version of the Batwing). And he shows no compunction at firing them at people he's chasing (as long as they're inside vehicles, of course). At one point, he avoids some annoying heat-seeking missiles in his "Bat" plane by dodging and allowing them to blast into buildings (no doubt injuring or killing folk inside) and, eventually, into an armoured vehicle driven by his enemy. This Batman seems to rely more on his armoured vehicles and high-tech devices than the comic book version ever does.

I would argue Batman isn't just an ordinary guy with fancy toys though - he must also have a superpowered healing ability given the amount of damage he recovers from. Early in the film, 8 years after hanging up his cape, Bruce's knees are so damaged that he has to walk with a cane. He invents some sort of bionic leg brace to help him walk but then later, after he's thrown into a underground prison, he manages leap and bound his way out without that bionic brace. It's amazing how those little problems manage to disappear when the plot no longer needs them. Perhaps it was sheer force of will?

A significant amount of this film actually concentrates more on new character, John Blake (well played by Joseph Gordon-Levitt). He seems to be shoehorned in - and actually does more detective work than the Dark Knight Detective himself - although you find out why by the end. Gary Oldman as Commissioner Gordon and Morgan Freeman as Lucius Fox are back again and as good as ever, whilst Michael Caine's loveable Alfred brings forth the tears and does a lot to ground the movie. The beautiful Anne Hathaway is fantastic as cat burglar Selina Kyle (I don't think she's ever called Catwoman and, to be honest, never really does the cat motif) and, character-wise, is probably the highlight of the movie. The dig at wearing high-heels was a nice touch. Tom Hardy's Bane looks impressive but I'm not sure about that voice. It could be clearly heard most of the time, so that wasn't the problem, it was just that it sounded too electronically high-pitched for such a bulk of a man. Amusing when it should have been menacing. Also, his Bane really isn't much like the comic book version - there's no venom to make him superstrong, for instance.

The story does do a great job of tying together the first and second films and especially expands on the former with a little twist near the end. And, indeed, it is the last half hour where the tension is turned up to 11 and everything (and everybody) comes together to produce a wonderful finale. The very end works perfectly for this silver screen version of the Batman, as the cowl is passed, Bruce learns to fear death and, in doing so, embraces life. I left the cinema with a big smile on my face knowing that it was the perfect way to end the franchise.

Though I still wonder how Bruce Wayne managed to travel from the foreign prison back to Gotham given that he had no money to his name, no passport, and Gotham was locked down. Well, other than the fact that he's the goddamned Batman! ;)
No comments: 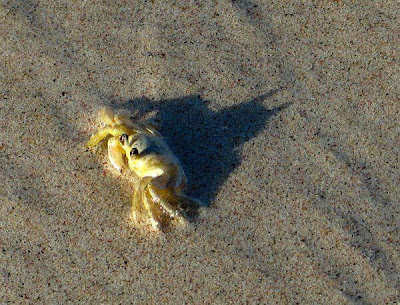 ...or Marvel's Avengers Assemble, as it's called over here in the UK - and as stated by the brief, and somewhat tacky-looking, title sequence at the beginning of this highly-anticipated summer movie. And, for me, the levels of anticipation were perhaps a little too high for this film to meet. My excitement over this movie had been dialled up to 11 so that when I went to see this last night I was slightly underwhelmed.

Now, I should be clear here, I liked the movie a lot. There was plenty of action, some witty one-liners and visual humour, great effects and a decent story that showcased every member of this superhero extravaganza. It's just that it didn't really make me want to punch the air and yell, "F*$# Yeah!" Perhaps a more stirring score would've helped? Certainly, I felt that Iron Man was a better movie (though the Avengers did have a more impressive final fight scene).

I also had to put up with watching this in 3D - the 2D version was shown either too early or far too late in the day at the cinema I went to. Still, at least the 3D effect was reasonably subtle. And, as is always my experience with 3D films, by about halfway through the film my brain had adapted so that I no longer noticed the effect (I was just left with the uncomfortable feeling from wearing the plastic glasses!).

There were some wonderful moments in the film - seeing Captain America leaping from car to car down mainstreet USA whilst explosions erupted around him, Hulk showing Loki who's boss ("Puny god!"), Black Widow 'questioning' Loki in his cell - and lots of gloriously over-the-top action. It was just what a summer action movie should be.

Pretty much everyone was given a chance to shine. For me, Tom Hiddleston did a fantastic job as Loki and I'm still impressed with Chris Hemsworth's portrayal of Thor (I love how he twirls Mjolnir around just before he flies away). RDJ is still the best man for the role of acid-tongued Tony Stark and Mark Ruffalo's fidgety, nervous Bruce Banner was probably the best version of the Hulk's pre-shirt-ripping alter ego to date.

Regarding the ending, I can see why some folk wouldn't have had a clue who the Big Bad shown post-credits was. He's only briefly shown - and he looks red as well, for some reason. No, he is not Hellboy nor Red Hulk. It's quite a bold move and Avengers 2 should be quite spectacular if this villain is involved (especially if he gains a certain golden gauntlet).

So, overall, a very enjoyable movie just not as incredible as I thought it would be. Still, it's a very impressive - and highly successful - act in emulating the comicbooks and bringing us this superhero movie crossover. 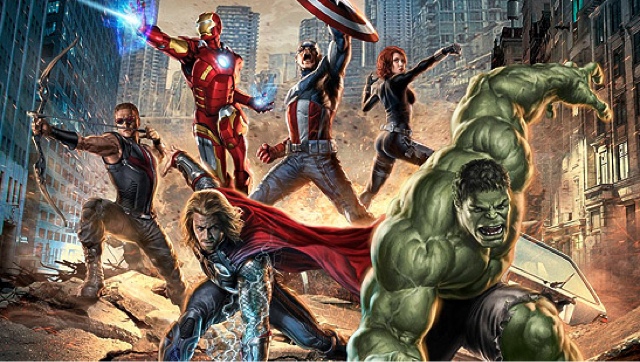 Well, for the first time in ages I visited my 'local' comic shop. I say local - its a train ride into hellishly busy Manchester. Hey ho.

Unfortunately when I got there in the afternoon all but two different comic books had gone! So all I got was DC's The New 52 and Dark Horse's Buffy. Oh and I bought John Byrne's Compleat Next Men vol 1. A pity really, because my daughter fancied getting the Bongo and Smurfs free comic books. Oh well... 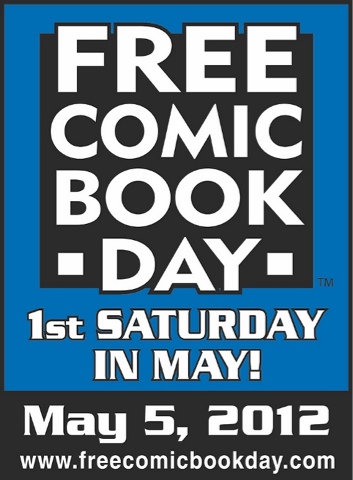 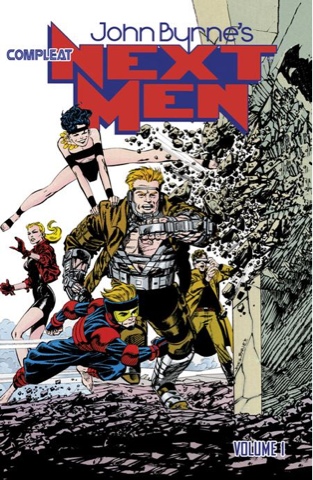 Well, I almost forgot Being Human was on. Luckily I spotted it was on in time. Although, I have to say that this show has evolved over time, and I'm not sure it's for the best. At the beginning, this was a little show about three people, each struggling with their own unusual condition, living together and trying to fit in and "be human". But now we have prophecies, wars, apocalyptic futures - its like some pulp fantasy novel. And we've lost Mitchell, Nina (off camera), and now George as well. Bang goes the original core to be replaced by a new setup. It's like it's a whole new show. Still, the setup has the potential to be interesting and it's still good TV. Just a same most of the folk we cared about have stepped through their door. 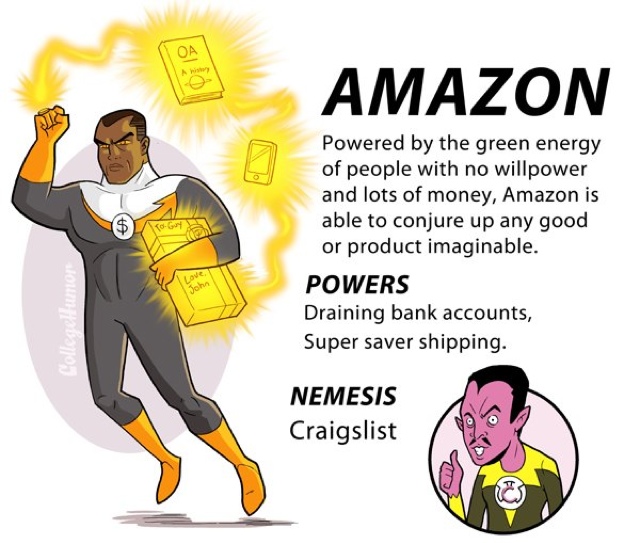 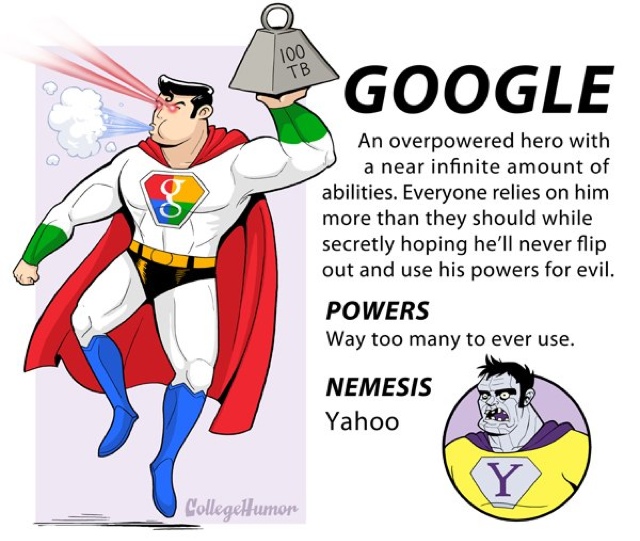 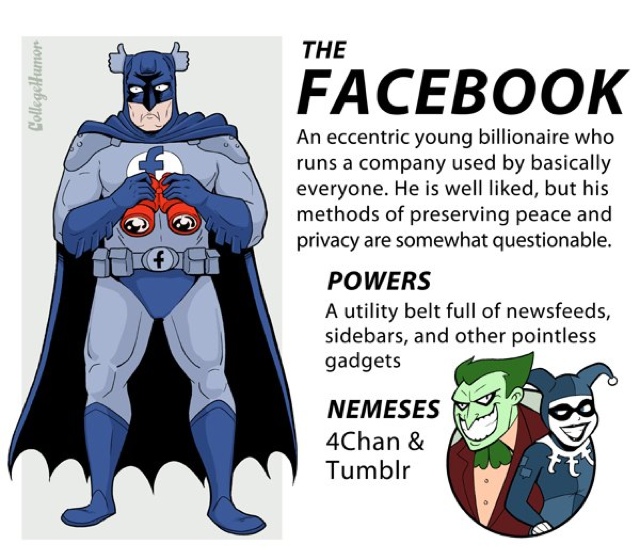 Plus some partying friends...

You said it, Supes! Merry Christmas, one and all.